The three pillars of Seabed 2030

In launching the Seabed 2030 project, the Nippon Foundation and GEBCO committed to three essential pillars of mapping the ocean floor.

The Intergovernmental Oceanographic Commission of UNESCO (IOC-UNESCO※1) held the “Ocean’s 8※2” awards ceremony during the Ocean Conference on June 6 (UN Headquarters/EST) to recognize outstanding contributions in the field of ocean science by organizations and individuals. Award recipients included Craig McLean, assistant administrator of the American National Oceanic and Atmospheric Administration (NOAA) and Morocco’s Princess Lalla Hasna, and from Japan, Yohei Sasakawa, Chairman of The Nippon Foundation. In his acceptance speech, Mr. Sasakawa announced specific details regarding “NF-GEBCO Seabed 2030,” a joint project of The Nippon Foundation and the General Bathymetric Chart of the Oceans (GEBCO※3) Guiding Committee that aims to produce a complete map of the world’s ocean floor by 2030, noting “Understanding the bathymetry of the global ocean is imperative, not only for improving maritime navigation, but also for enhancing our ability to project climate change and monitor marine biodiversity and resources.”

Currently, less than 15% of the bathymetry of the world’s ocean floor is accurately mapped. This project aims for 100% coverage by 2030 by compiling previously unreleased depth data from around the globe, turning that data into digital maps and making those maps available to the public, and identifying and filling in gaps from unexplored areas of the ocean where data is lacking. 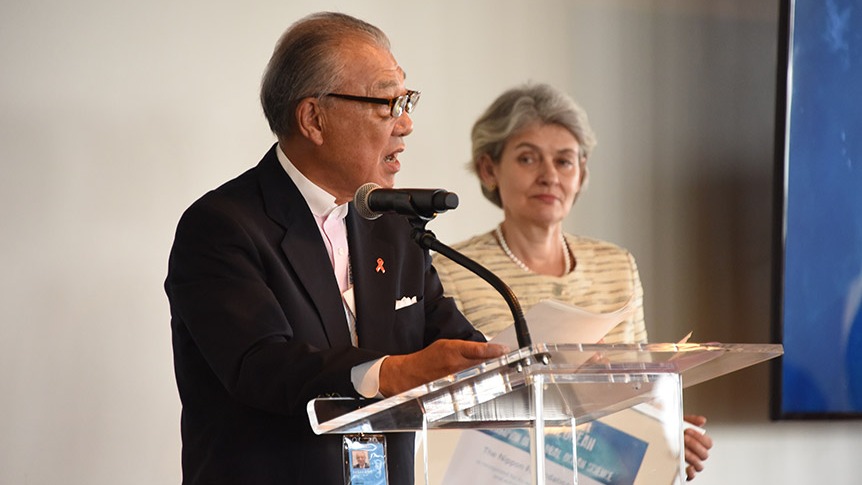 Three Pillars of the Project:

2. Creating maps and making them available to the public
In addition to creating high-resolution maps of the sea floor with the goal of leaving no features larger than 100m unmapped, the four newly-established RDACCs will enlist the cooperation of 78 Fellows from 36 countries who have participated in the joint training program that The Nippon Foundation and the GEBCO Guiding Committee have held since 2004 to train experts in the field of ocean floor mapping. The completed maps will be released on NF-GEBCO Seabed 2030’s official website so that anyone can easily access the latest information, and will also be made available for online resources like Google Earth and ESRI’s Ocean Basemap.

3. Identifying and filling in gaps from areas of the ocean where survey data is lacking
Areas of the ocean for which data does not exist will be identified and new mapping missions will be carried out using software developed specifically for this project. In addition, a framework will be created to promote technological innovation for mapping in areas where data cannot be collected efficiently using existing technologies.

This project will be carried out as a concrete action proposed by The Nippon Foundation with the cooperation of various institutions from around the world. Already, 24 government and research organizations, institutions, universities, and businesses have agreed to cooperate and participate in the project, and this number is expected to grow significantly going forward.

The “United Nations 2030 Agenda for Sustainable Development,” adopted by the UN General Assembly in September 2015, established 17 Sustainable Development Goals (SDGs), with the 14th goal being to “conserve and sustainably use the oceans, seas and marine resources.” Accordingly, the project places major importance on the establishment of cooperation between multiple institutions and human capacity building in the ocean field.

1. The Intergovernmental Oceanographic Commission of UNESCO (IOC-UNESCO)
The IOC is a commission established within UNESCO (the United Nations Educational Scientific and Cultural Organization). As the single UN organization for marine science research and study activities, it is engaged in researching pollution in the marine environment and global oceanographic observation systems.

2. Ocean’s 8
During a session at the UN Ocean Conference, this event, organized by IOC-UNESCO and supported by the UN, awarded eight people for particularly remarkable achievements from among the organizations and individuals who are implementing important initiatives in the field of marine science. In addition to The Nippon Foundation Chairman Yohei Sasakawa, awards were presented to Craig McLean of the US National Oceanic and Atmospheric Administration (NOAA) and Princess Lalla Hasna of Morocco.

3. GEBCO
The General Bathymetric Chart of the Oceans (GEBCO) is an organization that has worked with The Nippon Foundation for more than a decade. Founded more than 100 years ago with a vision of portraying the world’s ocean floor, GEBCO operates under the auspices of its two parent organizations, the International Hydrographic Organization (IHO) and the Intergovernmental Oceanographic Commission (IOC) of UNESCO. It is the only international project mandated to map the ocean floor of the entire world.