Plastic pollution has struck a nerve in the public mind, with consumers increasingly agitating for change from retailers and manufacturers.

Plastic pollution has struck a nerve in the public mind, with consumers increasingly agitating for change from retailers and manufacturers. It is far more visual and tactile than other environmental threats like emissions or biodiversity. Arresting images of sea turtles entangled in bags, mountains of waste on shorelines, and plastics in the digestive systems of marine life have proven provocative.

The famous episode from David Attenborough’s Blue Planet series on plastic waste could be the most influential media message on environmental harm in history, so heavily viewed in China that it reportedly slowed down the internet. Our consumption of plastic has led some experts to say we are living in the The Plasticene age. 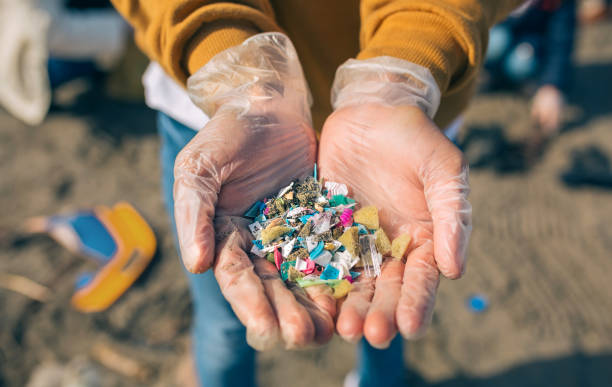 Microplastics—particles smaller than five millimetres—are working their way into the water and food systems. They could be introducing toxic chemicals like bisphenol-A (BPA).

But plastics are a more direct threat to marine, animal and human health at sizes you cannot see. Microplastics—particles smaller than five millimetres—are working their way into the water and food systems. They could be introducing toxic chemicals like bisphenol-A (BPA). This building block of plastics is linked to cancer and disrupts the endocrine system, with impacts on fertility, reproductive health and metabolic disorders including diabetes. Microplastics are even airborne and can cause inflammation and lesions.

Microplastics come from two sources: industrial processes, like microbeads used in some personal care products, or as a by-product of ‘wear and tear’ such as flecks from car tyres or wastewater from laundering certain kinds of clothing. They are, quite literally, everywhere. One 2015 estimate put the number of microplastics floating in surface waters as anywhere from 15 trillion to 51 trillion particles. Recent reports show they are accumulating in the blood of farm animals.

The problem is set to worsen because plastics exist on a continuum, with larger items breaking down into smaller particles over time. “If we could stop all plastics entering the environment tomorrow, we would still see an increase in microplastics over the next decade because of the legacy of plastics that [are] already there as it breaks down,” Professor Richard Thompson OBE, the marine biologist who coined the term microplastics back in 2004, tells Back to Blue. 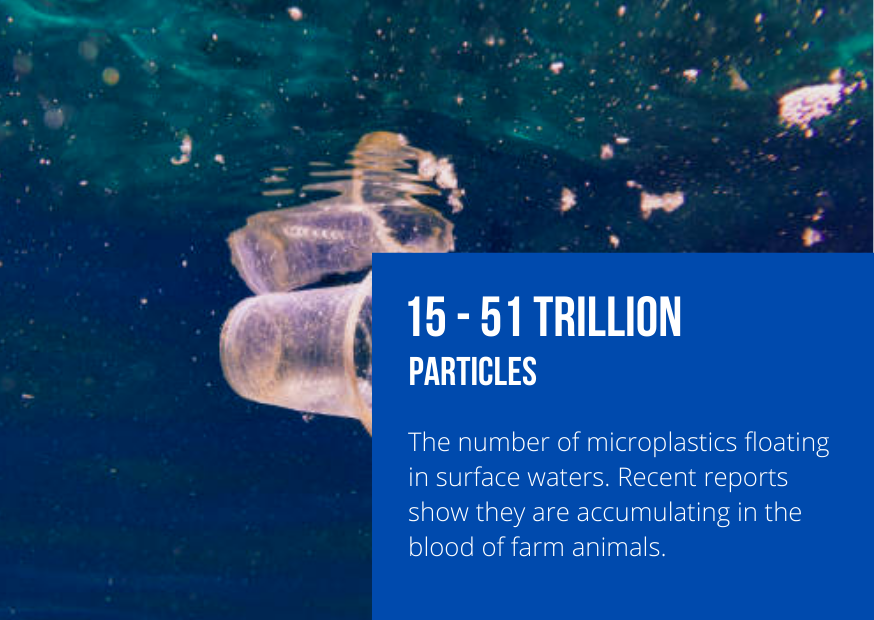 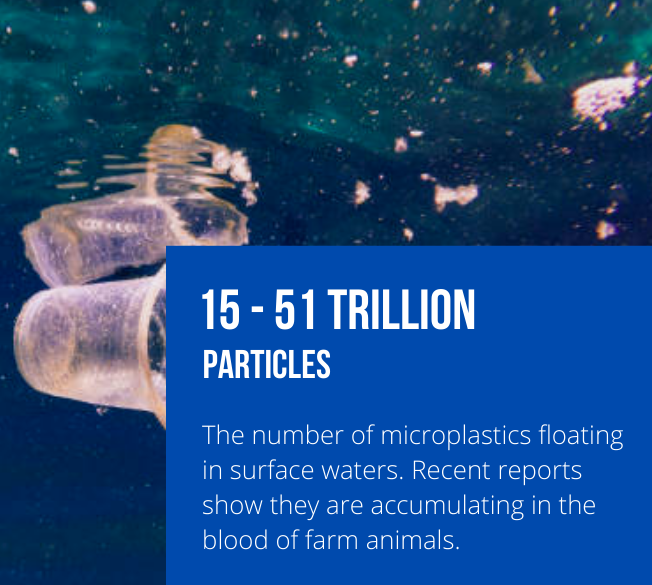 Professor Stefan Krause, professor of ecohydrology and biogeochemistry at the University of Birmingham, specialises in how microplastics travel through water systems. He notes how long microplastics get stuck in the freshwater system. Even if humanity disappeared overnight, he said it could take a century for the currently accumulated microplastics to be cleared from some large rivers like the Ganges—and even then they would simply end up in the oceans.

Professor Thompson says that the threats posed by plastics changes as you move along the size and shape continuum, leading to what he terms “spikes of harm”. At a certain size, for instance, they can entangle marine life, but not be ingested. Those that can be ingested become more threatening when they are small enough to cross from the gut into the circulatory system.

At a certain size, microplastics can entangle marine life, but not be ingested. Those that can be ingested become more threatening when they are small enough to cross from the gut into the circulatory system.

While microplastics matter in their own right—and have received less attention in the media narrative around plastics—Professor Thompson cautions against segmenting micro and macro too much. “The largest plastics in the ocean today will be the microplastics of tomorrow, so the solution to the large stuff is also the solution to the small stuff,” he tells Back to Blue.

There is no one-size-fits-all solution, but Professor Thompson says that talk of moving to a zero plastic world is unrealistic. It could even, given the inferior emissions profile of ‘friendlier’ alternatives like glass and cardboard, be misguided. Instead, we need a response on multiple fronts. 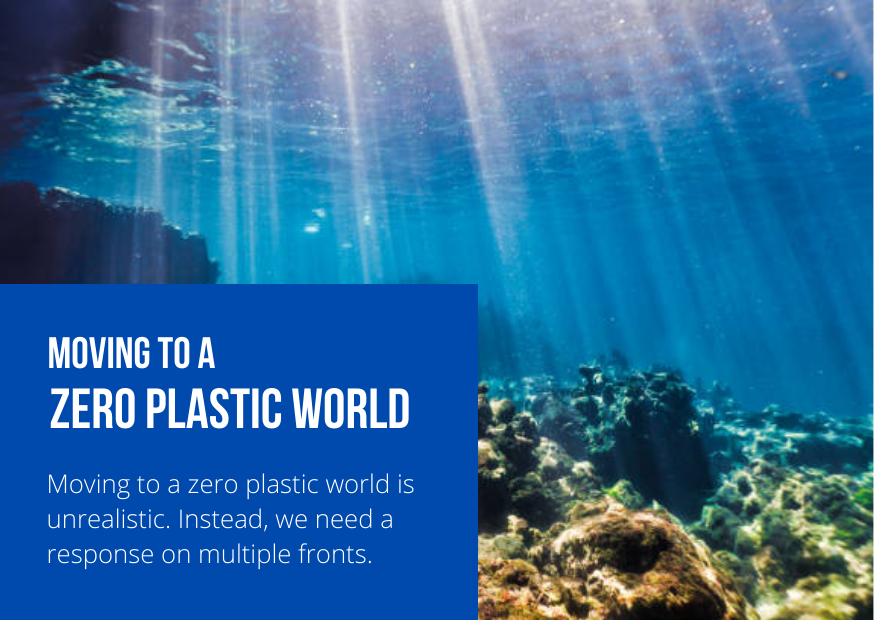 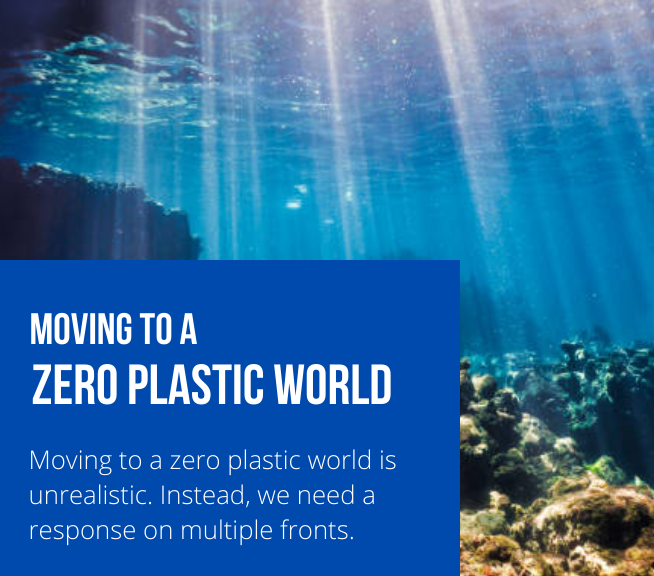 This might mean eliminating plastics in areas where they are not necessary or that consumers may not have even known, let alone demanded, they are used, such as cosmetics. At the other end of the spectrum, we need more joined-up plastics management policies, which our recent global index aims to quantify and benchmark at the country level. But we are playing catch-up.

Professor Thompson says the private sector moved from initially denying the plastics pollution problem existed at all to “deflecting blame on to someone else, typically whoever was not in the room, such as consumers.” However, over the past five years, he acknowledges “there has been much more of a consensus that there is a problem, which is a fundamental step. There is still disagreement on the numbers, but it is no longer being used to deflect the problem. The issue now is that we have spent so long debating whether it was a problem, no-one has thought about what the solutions are.”

Professor Krause says that large companies are becoming more active in tackling the issue, as funders, research partners and logistical supports—he cites Syngenta and Unilever as two firms he is engaging with. “It’s good to see that industry partners from manufacturing, agri-chem and textiles want to be part of the solution, as well as smaller companies [in] packaging,” says Professor Krause. “They all anticipate changes to regulation in the use of biodegradable materials.”

The private sector is, finally, becoming part of the solution.