Fishing without the fish:
lab-grown seafood is on the way

At least 14 firms, from Hong Kong to Montreal, are “cultivating” seafood entirely in laboratories.

Cows are no longer needed to make burgers or milk. Over the past few years, plant-based alternatives have shot into the mainstream. Milks eked from oats or nuts are served up by baristas around the world. Plant-based burgers, which mimic the taste and texture of beef convincingly, sit on supermarket shelves next to the real thing. Burger King sells the Impossible Whopper, with patties from Impossible Foods, an American manufacturer of vegan meats. McDonalds recently launched a McPlant burger, in partnership with Beyond Meat, another American disruptor.

The alternative fish market has been slower to arrive—but it is on its way. Dozens of companies are developing plant-based fish fingers, scampi and calamari. At least 14 firms, from Hong Kong to Montreal, are “cultivating” seafood entirely in laboratories. BlueNalu, a San Diego-based group, is growing sushi-grade cuts of bluefin tuna without a fishing net in sight and raised US$60m in debt financing last year. Wildtype, a competitor backed by Leonardo DiCaprio, an actor, raised US$100m this year to launch its cultivated salmon across America. 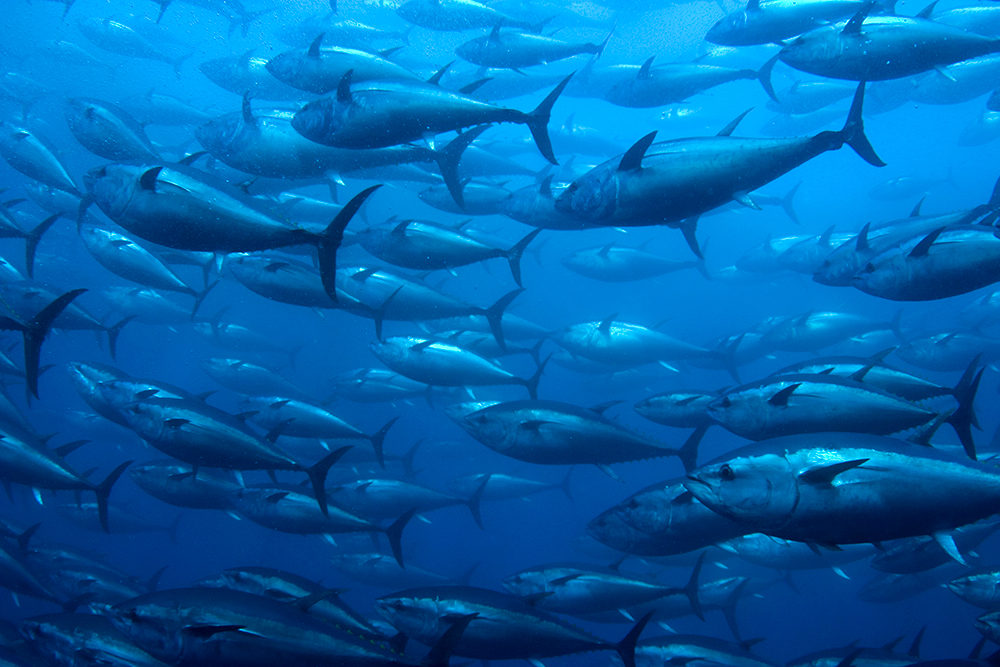 But alternatives are not the only way. Growing cells in a lab is not a new idea. Scientists have done so in vitro for decades, to create babies, among other things. In 1931 Winston Churchill, a British prime minister, even predicted this, saying: “We shall escape the absurdity of growing a whole chicken in order to eat a breast or a wing, by growing these parts separately under a suitable medium.” These new foods, he said with his usual prescience, “will be practically indistinguishable from the natural products”.

Researchers have realised his vision by extracting cells from a living animal in a harmless biopsy, then “feeding” those cells an oxygen-rich blend of vitamins, amino acids and sugars, in a bioreactor, to make them multiply. The resulting muscle, tissue and fat cells are built around a 3D scaffolding, and finally harvested to make a product that is identical to the original. “The beauty of cell culturing is it is the same product made in a new way,” says Lou Cooperhouse, the founder of BlueNalu.

“The beauty of cell culturing is it is the same product made in a new way,”

The process works on any type of protein. Eat Just, an American company, sold the world’s first lab-grown chicken nuggets at a restaurant in Singapore in 2020. Cell-cultured fish is not far behind. Singapore-based Shiok Meats plans to launch its lab-grown shrimp, crab and lobster in minced products such as dumplings, next year. 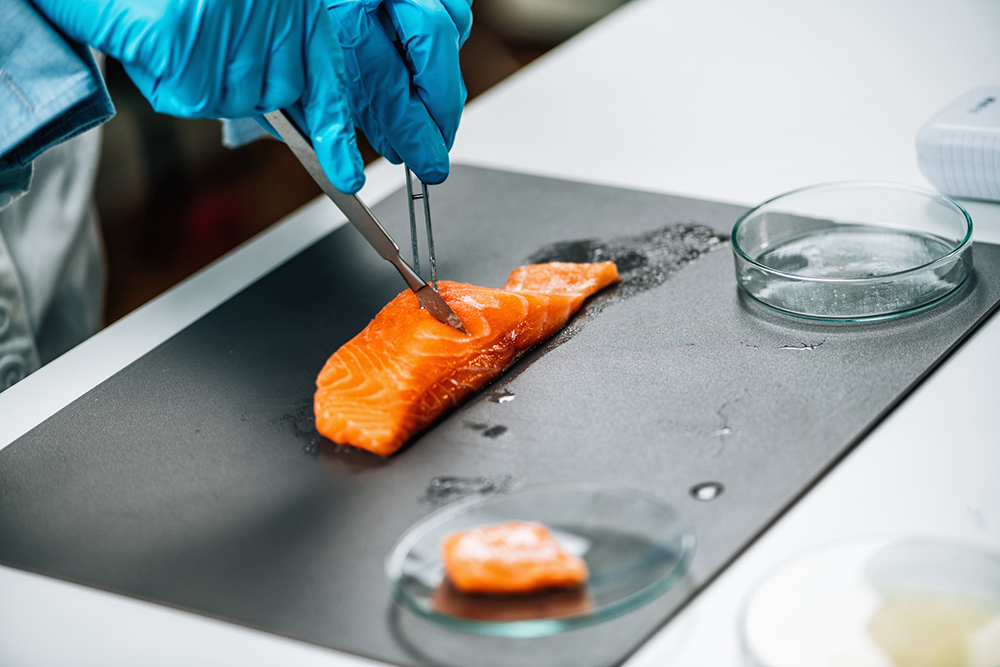 It is easy to see why investors are biting. Seafood accounts for almost a fifth of the animal protein consumed by humans. Demand for it has rocketed as the world’s population grows and rapidly growing middle classes spend more on protein. By 2030 global fish consumption is projected to be 30% higher than it was in 2010. There is also the issue of rampant, often illegal, overfishing, which is emptying the world’s oceans. At least a third of the world’s fisheries are overexploited, up from a tenth in the 1970s. Stocks of large fish have plummeted by 90% since then.

Fish farming, which was supposed to ease some pressure on oceans, is not keeping pace with demand and has gained a bad reputation. Critics argue that its environmental virtues are over-egged, because farmed fish are often given feed derived from wild seafood. Diseases spread like wildfire through their pens, so many farmed fish are pumped with antibiotics. Seafood supplies, farmed or wild, are threatened by climate change. They are often contaminated with mercury, microplastics and toxins, points out Mr Cooperhouse.

Fish grown in a bioreactor is not exposed to diseases or pollutants. Unlike the real thing, its quality should never vary. Diners who are uneasy about industrial-scale fishing can enjoy it with a clean conscience; and since producers make only the prime cuts, there are no bones or skin to throw away. “You are solving many challenges and helping to feed the planet with cell-cultured seafood,” says Mr Cooperhouse.

“You are solving many challenges and helping to feed the planet with cell-cultured seafood,”

Even so, companies face several challenges. The biggest is regulatory. Singapore pioneered a regulatory framework for alternative proteins in 2019, allowing the sale of “novel food”, provided it passes safety checks. However, no other country has yet given the green light to a cell-cultured product. It can take up to three years for companies to receive an approval for any kind of alternative protein in the EU. Wildtype has been in talks with America’s Food and Drug Administration (FDA) since 2019.

A second challenge is in supply chains. The high-tech kit needed to cultivate proteins comes from the pharmaceutical sector, points out Mr Cooperhouse. Its costs must still fall materially. Many cell-culture companies have relied on fetal bovine serum to “feed” their cells, yet it comes from the blood drawn from cattle at the slaughterhouse, and so taints ethical brands. Some, including BlueNalu, have developed synthetic alternatives, but that comes at a price. In 2019 Shiok Meats’ prototype of eight shrimp dumplings cost S$5,000 (US$3,680) to produce. Most of that expense came from its nutrient solution. 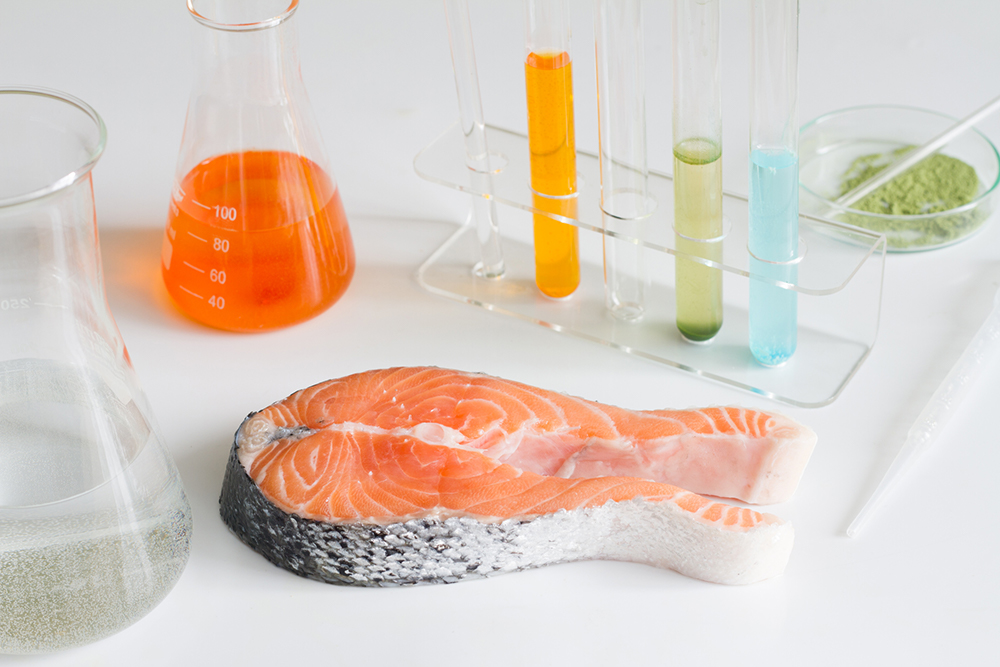 “The good news is all these hurdles are falling really quickly,” Mr Cooperhouse argues. The cost of Shiok Meats’ products has plummeted: it hopes to sell its cultivated crustaceans for US$50 dollars per kilo, after working on an in-house culture. Next, companies must show that cultured seafood is scalable. BlueNalu focuses on top-end varieties such as bluefin tuna, which can compete in price as the wild ones grow more endangered and expensive. It wants to create huge economies of scale and has visions of feeding whole cities. “I think that at the end of the day, BlueNalu, and companies like us, will be in the factory business,” he says.

A warning comes from the plant-based meat business. After several years of growth, its sales have slowed dramatically. Beyond Meat’s share price has dropped by a fifth this year, after huge financial losses. Maple Leaf Foods, a Canadian group that owns a plant-based meat brand, says consumers are not returning to meat alternatives because they see them as an “expensive novelty”. Lab-grown products are not so processed—another criticism of plant-based meat. Still, the idea of eating fish grown in a bioreactor may make some diners squeamish.

“I think that at the end of the day, BlueNalu, and companies like us, will be in the factory business,”

Plant-based food companies have faced huge pushback from the powerful meat lobby. However, there is a chance to learn from their mistakes. “I saw some of the plant-based founders being very confrontational with the conventional industry. My whole approach is to work collaboratively,” Mr Cooperhouse says. BlueNalu has partnered with groups including Thai Union and Mitsubishi Corporation, two seafood giants, in the hope of commercialising fish alternatives in Asia’s hungry markets. Whether seafood is farmed, fished, or grown in a lab, he argues, there will be demand for it. The proof of that will be in the eating.