There are plenty of fish in the sea

Alongside waves of policy instruments, research projects, and awareness-raising programmes, recent years have also seen the emergence of a distinct community of academics, businesses, government agencies and non-government organisations (NGOs) that routinely collaborate to identify and implement solutions to marine plastic pollution. As a result, colleagues freely exchange ideas, experiences and capital to support each other’s work and avoid duplicating efforts by merging similar projects.

While this kind of grouping increases efficiency and amplifies impact, a committed, collaborative community of this nature faces considerable challenges that must be addressed if it is to reach its full potential. One such obstacle is the risk of groupthink: partners support each other’s actions, but there are no objective and critical observers. Another is the risk of institutional capture: profit-driven organisations, such as plastic-producing companies or for-profit consultancies and the financial institutions that service them, could use their resources to divert the collective’s work towards furthering their own goals.

Our conversations with analysts, activists and scientists also suggest that the third, and perhaps most significant, challenge is that many important stakeholders are currently underserved by existing programmes. These stakeholders include finance and industry ministries, small and medium-sized enterprises (SMEs) and non-Western businesses, and Small Island Developing States (SIDS)—a lot of important missing perspectives.

Environment ministries are often quite involved in efforts to combat marine plastic pollution. However, it remains difficult to engage other important government agencies and ministries, particularly those related to finance, industry and trade.

There is also often a policy or priority mis-match between different agencies and levels of government, which creates conflicting or perverse incentives for local administrators and businesses. For example, Indonesia, despite having a national action plan on marine litter, faces varying outcomes because of its decentralised government. Leadership is crucial and engaging national, regional and local political leaders is essential; some localities, such as Sulawesi, do exceptionally well because local political leaders take ownership of the issue and lead by example, while others do not.

Engaging city-level policymakers is also essential because they are directly responsible for much of the infrastructure that manages plastic waste. Initiatives that do so, such as Urban Ocean, are emerging, but experts believe that there remains a significant gap in connecting local-level and national-level policymakers.

But there is hope. Political leaders and policymakers at all levels of government, particularly in South-east Asia, are keen to tackle marine plastic pollution because of increasing global attention: marine litter is now a high-profile political hot potato.

There are business networks that aim to tackle marine plastic pollution, and many of them include a small group of “the usual suspects”: large, multinational companies usually from the chemicals, packaging or fast-moving consumer goods categories. This group’s leadership is crucial because these companies have the budgets to innovate and the combined market share to create real impact.

It is vital that marine plastic pollution action includes working with companies and regulators to widen the group of private-sector actors that are addressing plastic pollution. Experts agree that it is particularly imperative to engage with petrochemical companies on slowing down virgin plastic production. 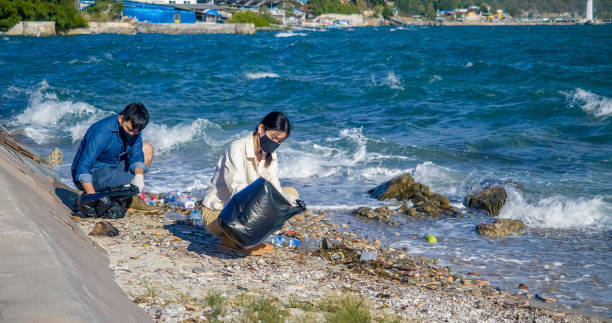 SIDS, particularly those in the Pacific Ocean, have been largely overlooked in efforts to tackle marine chemical pollution. They are often grouped together with East Asian countries, but the many plastics-focused projects and networks for East Asian nations do not address the specific contexts and problems faced by Pacific SIDS.

Pacific SIDS must also contend with a lack of resources and support: their public, private and civil society organisations have fewer staff members than those in other countries, and they have limited access to the latest science and best practices around plastic pollution.

Experts recommend that action on marine plastic pollution include helping Pacific SIDS share knowledge and information with other SIDS around the world. It should also include providing open-source science for SIDS and other developing countries—and culturally appropriate ways of assimilating it.

Concerted, collective effort is required to effectively solve any challenge, and the emergence of a tight-knit community is already benefiting efforts to combat marine plastic pollution. However, to avoid a washout, it must work towards engaging underserved stakeholders around the world.

The Back to Blue Plastic Management Index will be released in September 2021.